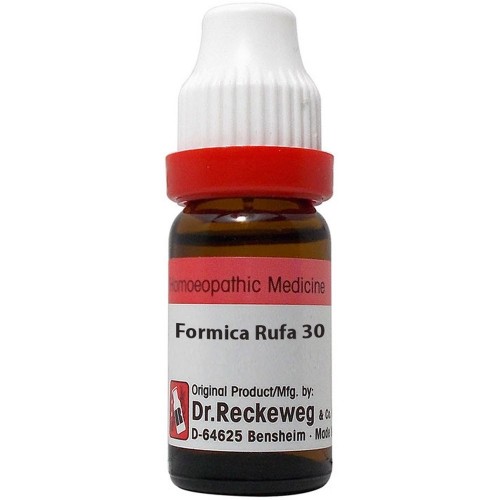 Dullness, pressure on both sides between temples and ears. Itching of scalp.

Sensation as if brain is too heavy and large.

Twitching of upper eyelid, pain in eye when awakes, better by washing, sensitiveness of right ear and temple is relieved with Formica rufa

Severe neuralgic pains between posterior of right ear and center of occiput.

Swollen and tender around with burning, soreness behind the right ear. Better from taking right hand and rubbing gently behind right ear.

It can be used for the complaints of Polyps.

Sore throat in morning, with much mucus.

Burning pain in stomach, constant pressure at cardiac end of stomach, and a burning pain there.

Flatulence with dull pain in the spleen.

Constipation and sensation of constriction in sphincter.

Painful desire in anus and rectum for stool, is relieved with Formica rufa.

Much urging with albuminous urine, bloody urine, dribbling of urine is relieved with Formica rufa.

Menses appear early, Lack of milk with nursing women, bearing-down pain in back, stitches in region of left nipple.

Hot irons better pain in neck. Pain from neck up to back of head.

Severe pain across sacrum and dorsum of each hand indicates Formica rufa.

Itching in armpits in morning, Bruised pain in hips at night, causing him to change from side to side.

Weakness of lower extremities, stiffness and contraction of joints is relieved with Formica rufa.

Nodes around joints with redness, itching of the skin,nettle rash.

Headache, vomiting with headache, pain in eyes, stitches in ears.

There are no such side effects. But every medicine should be taken following the rules as given.

It is safe to take the medicine even if you are on other mode of medication like allopathy medicines, ayurvedic etc.

Homeopathic medicines never interfere with the action of other medicines.

Take 5 drops in half cup of water three times a day.

You can also medicate the globules and take 3 times a day or as prescribed by the physician.

We recommend you to take under physicians guidance.

Always keep a gap of 15 minutes before or after meals when you take medicine.

If pregnant or breastfeeding, ask a homeopathic practitioner before use.

Avoid eating tobacco or drinking alcohol during the course of medication.

We have assumed that you have consulted a physician before purchasing this medicine and are not self medicating. Homeopathic medicines have several uses and are prescribed on the basis of symptom similarity.